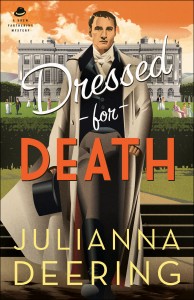 Having read Rules of Murder a few years ago, when I had the opportunity to check out the latest in the Drew Farthering Mystery series by Juliana Deering, Dressed for Death, I snatched it up.

Amateur detective Drew Farthering and his young wife are invited to a special Regency-era house party being hosted by old friends. While a bit unusual (no vehicles allowed, only authentic Regency era resources), the fun is unabashed. Until someone dies. Was it a drug overdoes? An accident? Intentional? Was it murder? Drew sets about to help his friend (and satisfy his insatiable curiosity) by solving the puzzle. But what he finds leads to more bodies and more questions…

I think perhaps jumping straight from book 1 to book 4 has caused me some issues. I felt as though I was expected to know some of these characters (even secondary characters), their relationships and quirks before I opened the pages of this book. Truly, I think there is a way for authors to neither bore their followers nor leave new readers in the dark, so I was somewhat disappointed that I felt like the new person in the Farthering world, unaware of who the players were.

Otherwise, though, Dressed for Death, was a fun affair — if murder can be considered fun! The Regency era party sounds delightful. Who wouldn’t want to dress up and pretend to live in another era for a weekend of fun and frivolity? But the illusion comes to a crashing halt when Drew’s best friend’s fiancee is found dead. END_OF_DOCUMENT_TOKEN_TO_BE_REPLACED