Warning: "continue" targeting switch is equivalent to "break". Did you mean to use "continue 2"? in /homepages/15/d295193855/htdocs/bluelikethat/wp-content/plugins/jetpack/_inc/lib/class.media-summary.php on line 87
 Life Archives - Blue Like That 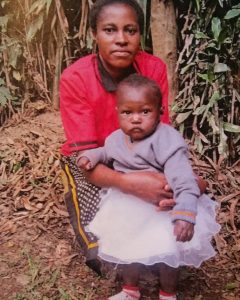 I wrote her letters, sent her photos and postcards. I wanted to connect with her. I even got to meet Katherine once, and her brother and mother and aunt. Katherine graduated several years ago. I hope and pray her education is serving her well.

By that time, I had come across the idea of selecting a child the same age and gender, perhaps with the same birthday, as your own child so they can be pen pals. Though I didn’t have any children of my own yet, I thought this was a brilliant idea as it could also help teach privileged children that they are really more like impoverished children than different. It can teach children in a self-centered culture about other parts of the world. It can expand horizons and develop character.

After Fiona was born, we found a little girl born on the same day in Uganda and immediately signed up to sponsor her. Her name is Esther. END_OF_DOCUMENT_TOKEN_TO_BE_REPLACED 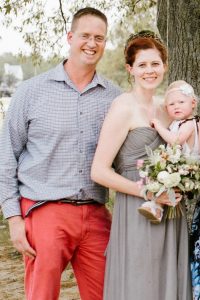 For a long time, I’ve been striving to simplify my life, including my “beauty routine” (whatever that is). Simultaneously, I’m trying to use fewer synthetic and potentially harmful chemicals and instead fine natural replacements that work as well or better.

I so appreciated reading about what other real people are using and loving, especially knowing that I wasn’t looking at advertising, or even bloggers receiving perks. So, in that vein, I thought I’d throw this out there; here are a few of my favorite beauty products!

This doesn’t dry out my face too much (no squeaky clean feeling!), but it definitely gets me feeling fresh and free of the day’s troubles. END_OF_DOCUMENT_TOKEN_TO_BE_REPLACED 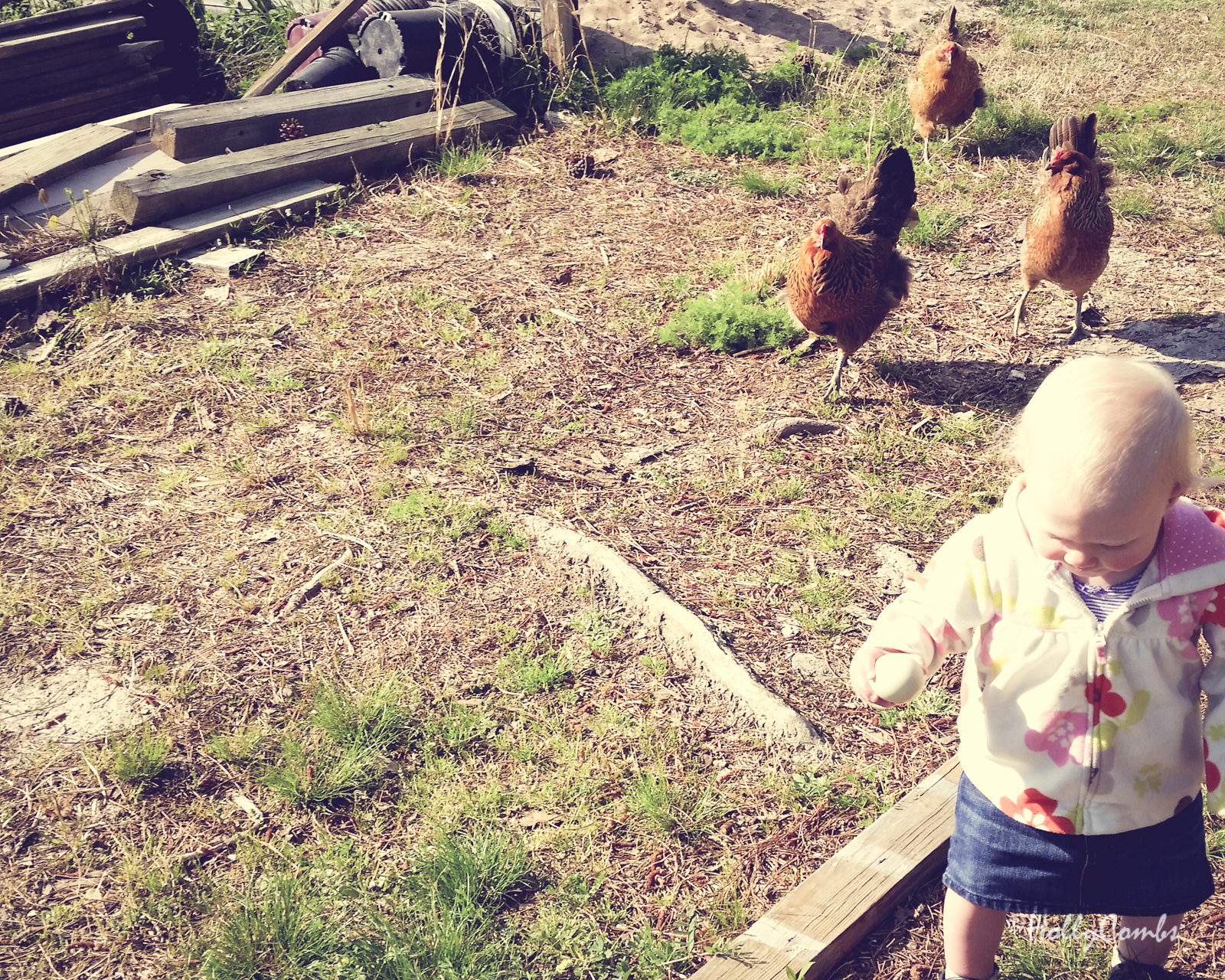 It was 10 minutes before I had to be out the door for work. The baby had been up several times throughout the night (teething) and I was tired. Husband had made me a cup of tea and a breakfast sandwich to go. Since I was ready early (solely because I didn’t have enough time to shower), I thought I might indulge in eating at home instead of on the run.

“Why don’t you take Fiona out to feed this morning?” Husband prodded.

(I used to do all the feedings of our animals. But when I was pregnant, I had severe nausea and fatigue and struggled to make it into work each day, so Husband took over. His work day is more flexible than mine anyway. When I went back to work after my maternity leave, I was the one juggling Fiona’s drop-off each morning, so while I hurried out the door with more bags than I could count (laptop bag, purse, lunch, bottle bag with empty bottles for me, bottle bag with full bottles for her, diaper bag, etc.), Husband continued to feed.)

When he suggested I feed this morning, my first thought was “you’ve got to be kidding me”. END_OF_DOCUMENT_TOKEN_TO_BE_REPLACED 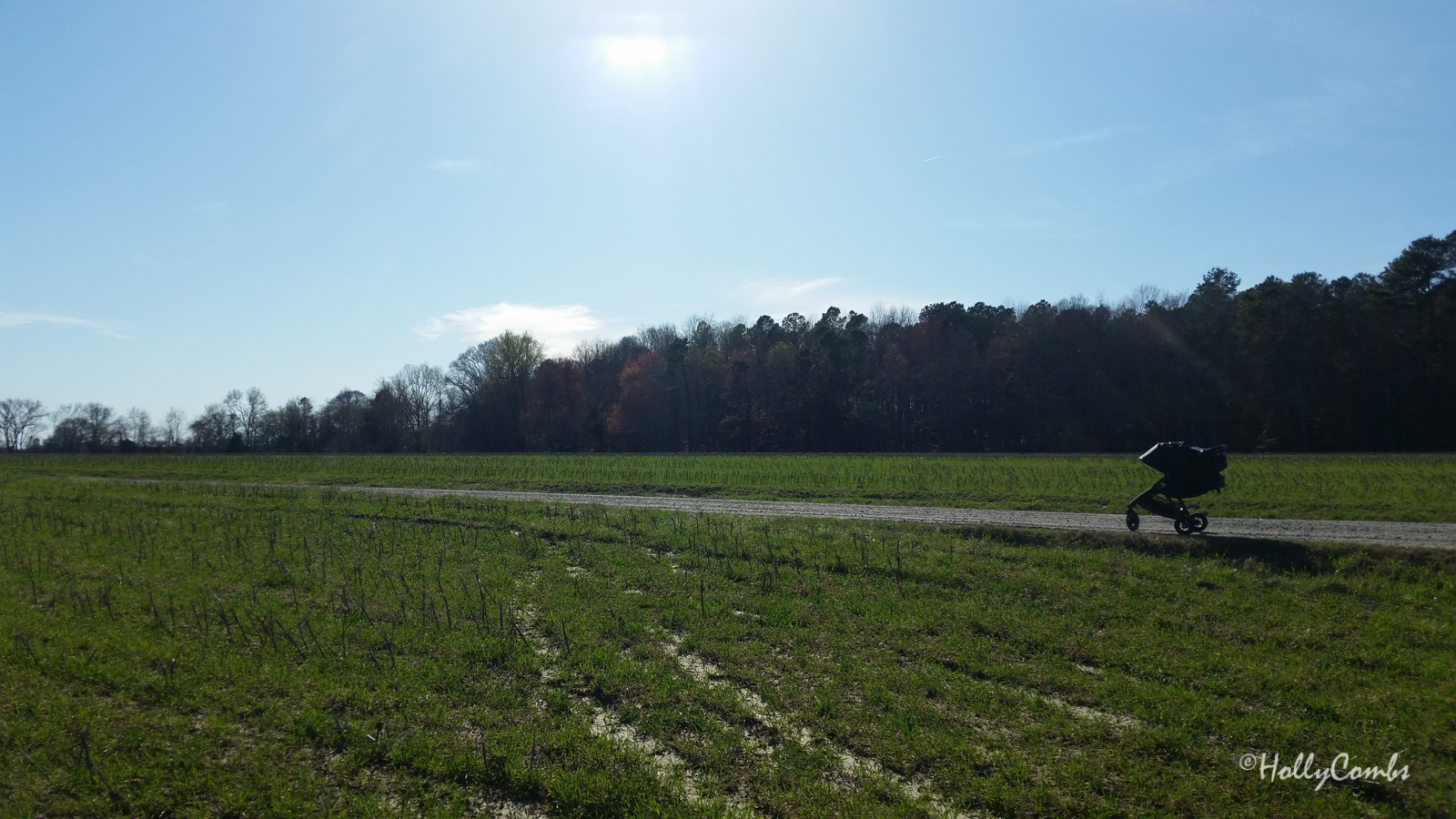 As we’ve come around to one year since my maternity leave, I’m realizing how acute my sensory memories of that time are.

Sound: Anne Bogel’s voice while listening to the podcast “What Should I Read Next” (newly discovered during my maternity leave) and narrator Hillary Huber from listening to the audio version of Katherine Reay’s Dear Mr. Knightley, the first audio book I attempted on my leave (which is when I rediscovered audio books).

Taste: Spinach salad with craisins, walnuts, avocado, blueberries and an olive oil/balsamic vinegar dressing that I ate almost every day for lunch. Also, the Adventure Trail Mix from Aldi that got me through all the late night feedings.

Smell: New baby, of course. Also, spit up. And the dirty diaper of an exclusively breastfed baby, which I’ve heard likened to buttered popcorn.

Feel: The feel of my CityMini Jogger handlebar bouncing along the gravel road during my daily walk. END_OF_DOCUMENT_TOKEN_TO_BE_REPLACED 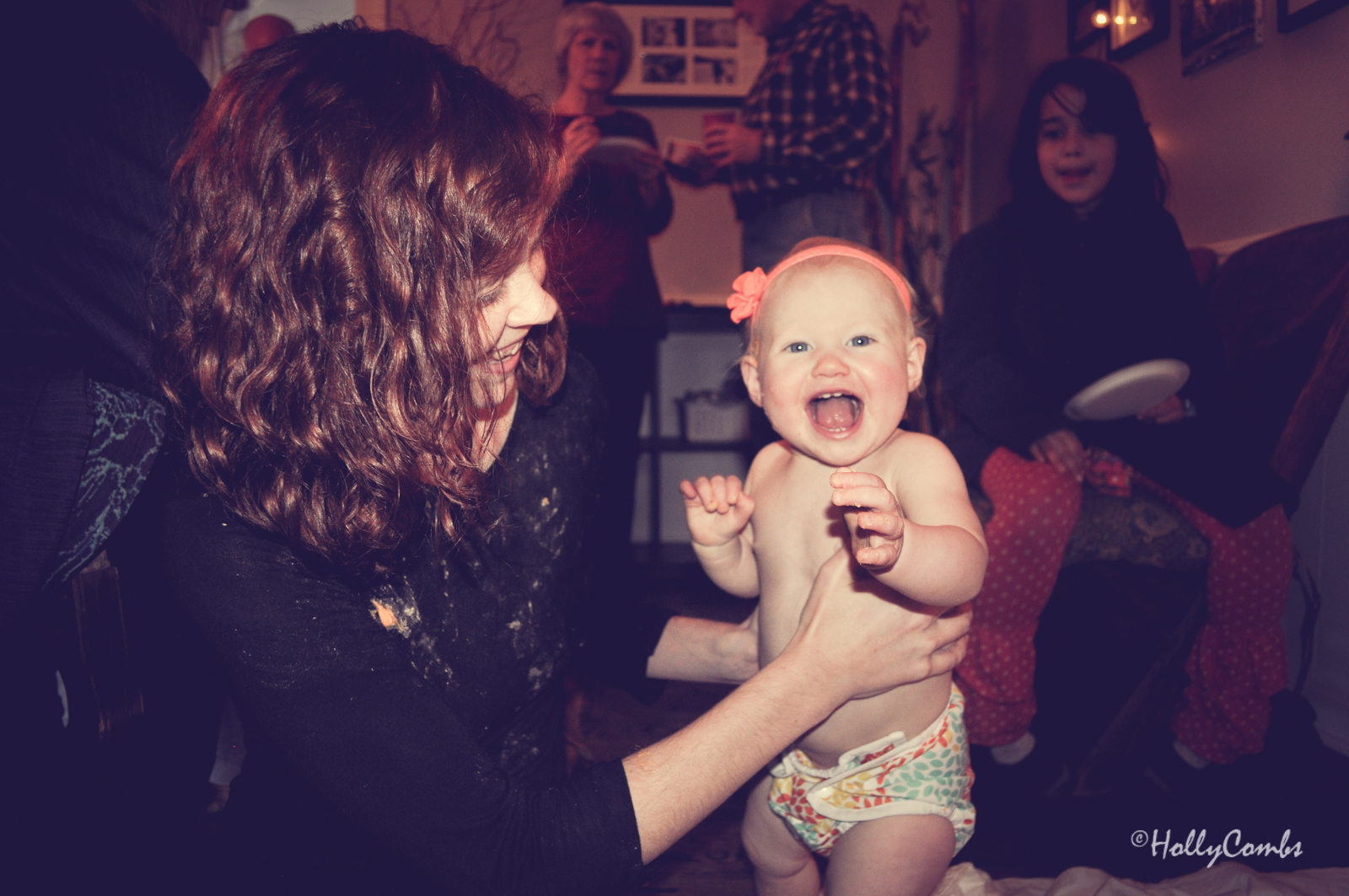 I had a choice yesterday to embrace the joy and freedom of that attitude, or shut down under the embarrassment and shame of our culture. While nursing, Fiona realized she could lift my camisole and see my belly. Oh, she thought this was the best thing ever. She could lift and lower my shirt, exposing and concealing the one part of me that still bears the signs of pregnancy. Squishier than it used to be, stretch marks marring my once-smooth skin. Delighted with her new game, she started poking my belly.

I had a choice — tell her no, pull my shirt back down, teach her to be ashamed of such things. Or, play back. END_OF_DOCUMENT_TOKEN_TO_BE_REPLACED 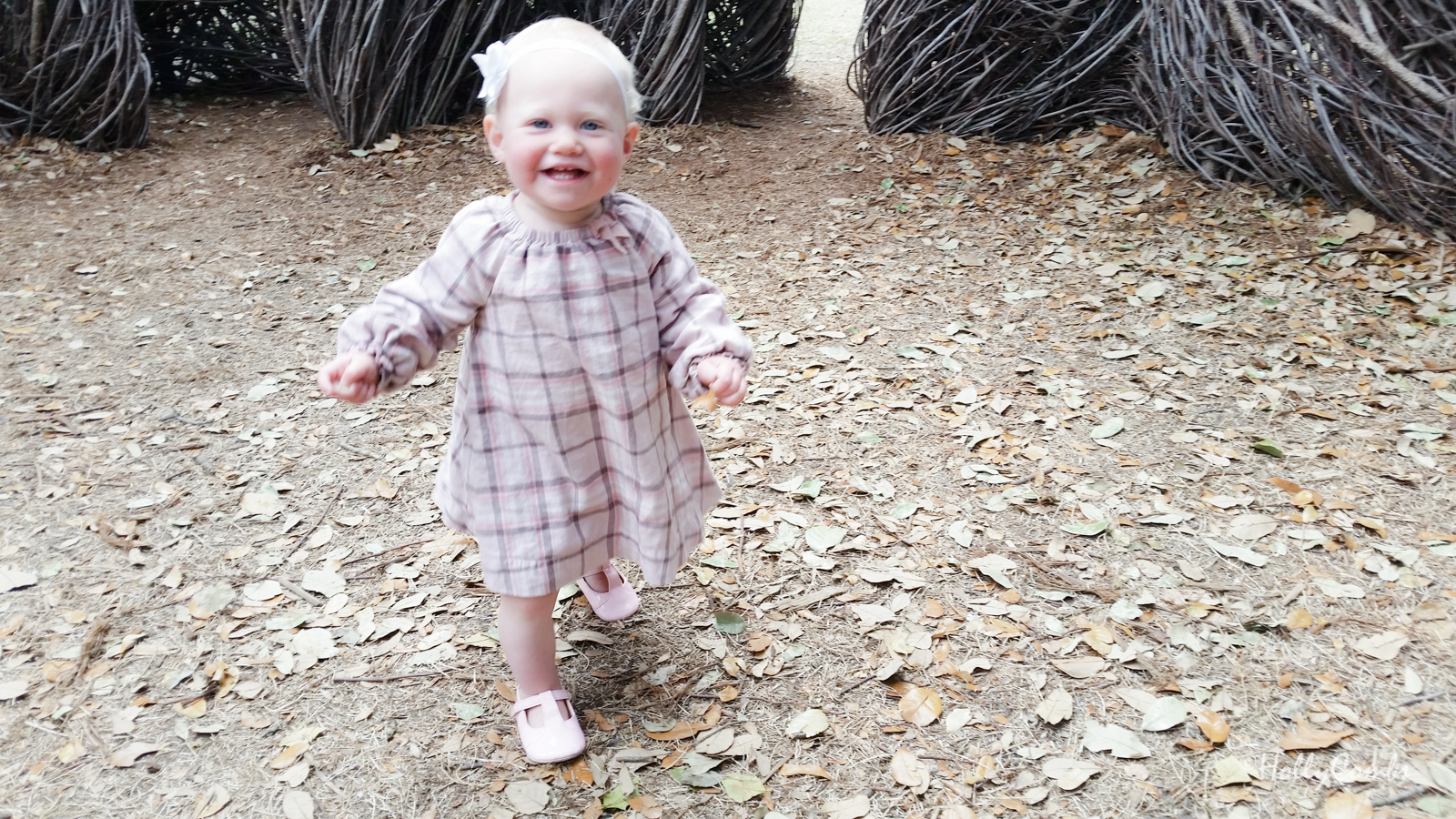 “Godliness with contentment is great gain.”

It’s a verse I’ve heard since my youth, one I have often striven for to varying degrees. Contentment remains…elusive, though. In fact, I believe contentment looks different in varying phases of life. The lessons learned about contentment as a single 21-year-old are useful, but different than the lessons in contentment as a wife and mother in my 30s.

We have done a lot of growing, a lot of striving. We have purchased a house, moved up in our careers, made significant changes, renovated a home, had a baby, and so much more. While all of these are good things, they aren’t centered on contentment (though they are not inherently opposed to it either).

As I moved into this new year, as I continue to learn what it means to be a working mom, as I strive to balance my life and my career, I feel a call toward contentment. END_OF_DOCUMENT_TOKEN_TO_BE_REPLACED 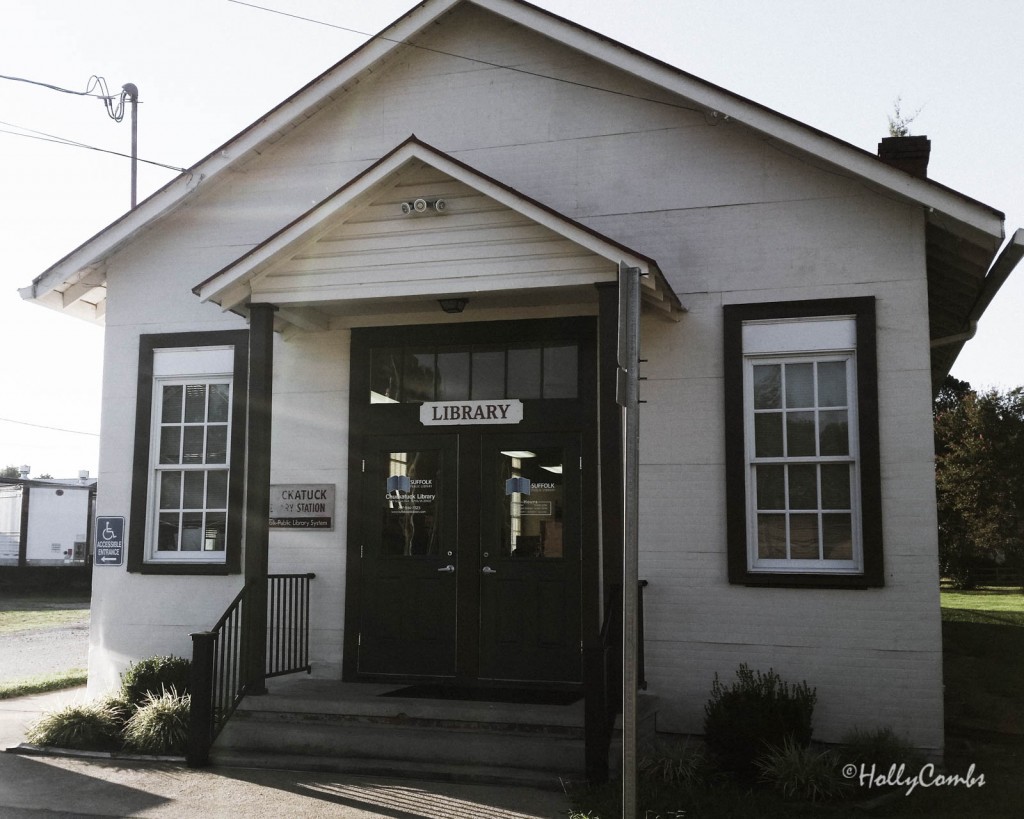 I love our library. Just a few miles from our house (2.1 to be exact), I have dreams of me and Fiona biking down to the library to five into books or story time or star gazing nights.

Just one of the branches of the Suffolk Public Library, Chuckatuck is easily the smallest permanent library I’ve ever seen, just 2,000 sq ft. And the cutest. The building was formerly the cafeteria of Chuckatuck High School (the building that is now Sauders Supply) and in 1989 it was given new life as a library.

It has everything a library needs: books, a librarian, a few computers, WiFi access, and a children’s section where littles like Fiona are invited to stay a while. Mondays (not every Monday, but maybe once or twice a month) are now my library day. The library is generally only open during working hours on weekdays, but it is also open on Monday evenings. END_OF_DOCUMENT_TOKEN_TO_BE_REPLACED

It struck me just then, that perhaps that’s how God feels. END_OF_DOCUMENT_TOKEN_TO_BE_REPLACED

I have so enjoyed putting together a nursery for this little one, and those who will follow. Knowing I wanted this room to be gender neutral, both because we didn’t know the sex of the baby and because I want to be able to put multiple kids in one room, potentially of differing genders, I selected gray and orange as my colors. My “theme” if you will is woodland animals like foxes and owls — but truth be told, I don’t like any room to look too theme-y. So you’ll find I included a lot of geometric shapes and a variety of textures (I am such a texture person!).

My inspiration board helped me figure out what I liked and what I wanted to strive for as I pieced things together. It actually helped me identify what it is that I like — as opposed to just grabbing every “cute” baby item I could find (which, yeah, as a pregnant woman is sooo easy to do). 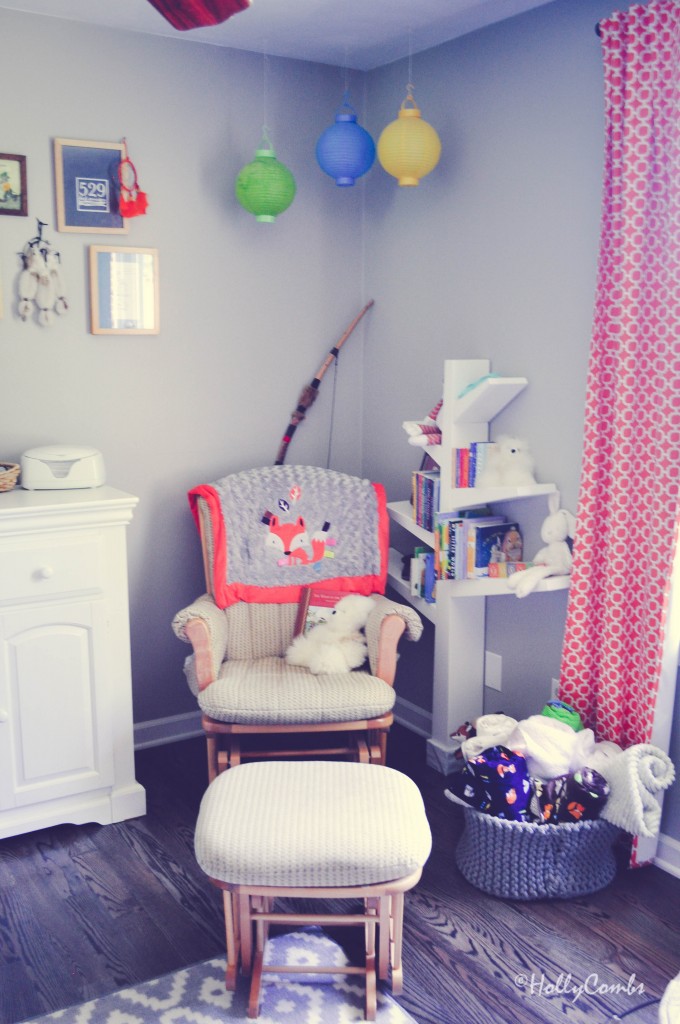 END_OF_DOCUMENT_TOKEN_TO_BE_REPLACED

Six months in I’m often getting ask how I’m doing. The whole mom thing, is it good?

The short answer is, yes. I love being Fiona’s mother. The baby thing comes pretty naturally to me (and I’ve had a lot of practice with 10 nieces and nephews!).

The long answer is, it’s complicated. The mom thing I’m loving. The work thing is great. It’s the combination that’s hard. I’m still figuring out a rhythm to being a working mom. How do I give my all at work and still have enough of me left over for this precious babe and Husband? Left over? What an awful way to word that. My family should be my first priority, Husband and babe come first. But in real life, they come at the end of a long, arduous day.

I managed to get out of the house this morning on time (because I woke up at 5:00), without spit-up on my shirt (this is a miracle), with lunch (yesterday’s because I never had time to eat yesterday), and breakfast already eaten (yay!). I felt like I was on top of it. I dropped Fiona off at her nanny’s and headed into work, where I promptly noticed something white all over my black boots, dust? No, spit-up. Lovely. I’ll clean it off as soon as I get to my office, I thought. But I didn’t. That spit-up went right back home with me at the end of the day. END_OF_DOCUMENT_TOKEN_TO_BE_REPLACED