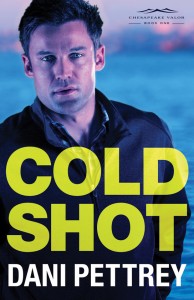 Dani Pettrey’s latest novel Cold Shot is the closest thing to Dee Henderson’s O’Malley series that I have read. That may not sound like high praise, but trust me — it is.

Henderson’s O’Malley series is one of those iconic, career defining, genre quintessential series that is beloved and held dear by readers. The O’Malleys are more like friends than characters. I’m starting off this review by mentioning this because Cold Shot sparked a similar type of interest and investment. Cold Shot is by no means a replication of Henderson’s work, but it echoes so many of the same elements that make the O’Malley series shine.

When park ranger and former-sniper Griffin McCray comes across a 21st century skeleton among the Civil War battlefields of Gettysburg, charming and frustrating forensic anthropologist Finley Scott finds evidence linking the murder to an expert sniper — sending Griffin on a quest to learn the truth behind the murder. When Griffin and two of his childhood friends — an FBI special agent and a crime scene analyst — are thrown together again, old grudges and two unsolved mysteries churn to the surface.

Cold Shot’s cast of characters are a complex group of friends who have known each other their entire lives along with some new acquaintances thrown in for variety. As the book evolves, the reader learns more and more about the friends, peeling back layers of history and complex relationships.

I liked the main characters Griffin and Finley, especially identifying with the intelligent and spunky Finley. As the plot unfolds, the other characters who will no doubt play prominent roles in subsequent Chesapeake Valor books are introduced and developed. They are varied and interesting and I look forward to getting to know each character better in future volumes.

The plot was interesting and well woven for the most part. However, the reader is rarely left in suspense and I have to say that I didn’t ever really feel that Finley or Griffin were in danger. This made the climax of the plot less than gripping. I hope that Pettrey succeeds in keeping me on the edge of my seat in book two of the Chesapeake Valor series, because I will definitely be reading it!

Pettrey weaves themes of past mistakes and forgiveness throughout the story, including a professional error in judgement that ended a career, a personal secret that hurt loved ones and long-held blame and bitterness over events outside of anyone’s control.

Overall, I think Cold Shot is one of my favorite books of Pettrey’s to date and I am looking forward to reading more of the Chesapeake Valor series in the future!

I received a complimentary copy of Cold Shot from Bethany House Publishers, but I was not otherwise compensated for this review. All writing, thoughts, and opinions are solely mine.

View my other reviews of Dani Pettrey’s books.

This post contains some affiliate links, which means I receive a small percentage if you make a purchase using this link.