Warning: "continue" targeting switch is equivalent to "break". Did you mean to use "continue 2"? in /homepages/15/d295193855/htdocs/bluelikethat/wp-content/plugins/jetpack/_inc/lib/class.media-summary.php on line 87
 Book Review: Dauntless - Blue Like That 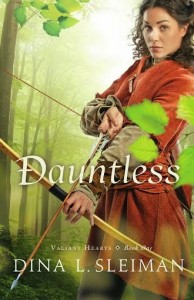 Having recently enjoyed reading the Divergent series, where the term Dauntless was, of course, key to the entire concept, I was a little skeptical, but intrigued when I received this new novel by Dina L. Sleiman titled Dauntless.

Lady Merry fell from grace when her father stood up to the king – and paid with his life. Now she leads a band of outlaws in the forest, but they are unlike any outfit you’ve ever seen before. At 17, she is the eldest. The children are smart, clever and wily. They devise creative plans to steal what they need to survive without getting caught. But then Merry is captured, by none other than her childhood sweetheart who now works for the king. Will he turn her over to the king? Will he allow her band of children to be caught and hung? Or will the children save the day?

I would have enjoyed this novel starting back before Merry became an outlaw. What was her life like then, what was it like to lose everything, what was it like to come of age under such circumstances, taking responsibility for so many little ones? This almost felt like it should be the sequel to the novel. That said, it was enjoyable, if not profound, and interesting, if not original.

The unique historical background was certainly of interest, though I think I would have preferred more historical and cultural context so I could come away from having read it with a sense of having learned something of a different time. The characters were likable, the struggles real. I think Allen, one of the supporting characters, may be my favorite one of all.

While I wasn’t blown away by Dauntless, I would certainly pick up another book from this author for a quick, fun, enjoyable read. So if that’s your speed, I can recommend it!