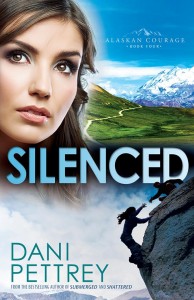 As it states on the back cover of Silenced, by Dani Pettrey:

Jake Knew Something Was Wrong.
But He Never Guessed How Wrong.

When Jake,a former detective, and Kayden, an expert rock climber, are roped into investigating a murder, they learn that not everything is the way it appears. And soon, Kayden’s life may be in danger from an unseen enemy.

This novel had less of the suspense of previous books in the series. Instead, there was a lot of investigating — talking to a suspect, and then a witness, and another suspect, and then back to the first. And so on and so forth. The thing is, I’m sure that a lot of police work really does happen this way, but it doesn’t make for the best page-turner.

That said, I did enjoy the book. I was concerned that I simply wouldn’t like Kayden, because by the end of book three, I really didn’t. But being able to get inside her head and her heart made me recognize why a man like Jake might fall for her. I gained a new respect for her and her story through this novel. I also very much enjoyed getting to know Jake better, after being more of a fringe character in previous novels.

My biggest struggle with this book was that it didn’t seem like the two plot lines connected. It was almost as if one mystery was solved and then the second. And, as a reader, there was little way to guess the final whodunnit. The very ability to do that was one thing I lauded about the third book in the series, Stranded.

My critiques here are mostly because I hold Pettrey and her novels to such a high standard. Really, overall I would highly recommend Silenced and the rest of the Alaskan Courage Series to anyone who enjoys a good Christian suspense novel. Dani Pettrey is absolutely a must-read author. And I am very much looking forward to the final book in the series, Sabotaged!

Also read my reviews of Submerged, Shattered and Stranded!

I received a complimentary copy of Silenced from Bethany House Publishers, but I was not otherwise compensated for this review. All writing, thoughts, and opinions are solely mine.