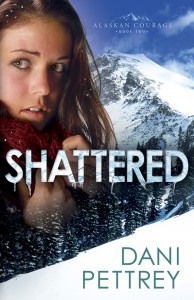 Dani Pettrey’s second novel Shattered was a great follow-up to her debut, Submerged. I stayed up far too late engrossed in the story, and if I’d had the time I would have read it straight through in one sitting.

Shattered picks up where Submerged left off with the McKenna family, with the lead roles going to sister Piper McKenna and family friend, deputy Landon Grainger. When young Reef McKenna is accused of murder and arrested by Deputy Grainger, Piper and the McKenna family are determined to prove his innocence. With local law enforcement convinced Reef is their man, the family takes on the investigation themselves. Piper and Landon finds themselves facing a motorcycle gang, corporate espionage, witness protection, murder, and kidnapping.

The plot is a series of twists and turns as Piper and Landon try to discover just what landed Reef in jail awaiting trial for murder. The adventure never seems to stop and takes them from Alaska to Canada to California, Oregon and beyond chasing leads. The suspense plot was definitely the stand-out feature of Shattered.

While I enjoyed getting to know all the characters, I was disappointed not to learn more about Piper personally. Other than her frank nature, little of her inner thoughts, personality and struggles was explored. Although I watched her come to a startling realization about herself, I didn’t see her grow in the midst of the story. Similarly, while Landon’s struggles were expressed, they were mentioned almost casually with little depth or exploration and little growth. Further, I struggled with how little impact the arrest of their youngest brother seemed to have on the family. In my experience, the fact that he has been something of the “black sheep” of the family would make the events all the more traumatic for the family, causing more emotions to surface than just indignation.

Although the characters were not as well developed as Pettrey’s debut novel, I would highly recommend Shattered to anyone looking for a good adventure and an intriguing mystery! It was hard to put down. I look forward to the next installment of the Alaskan Courage series, coming this fall.

I received a complimentary copy of Shattered from Bethany House Publishers, but I was not otherwise compensated for this review. All writing, thoughts, and opinions are solely mine.