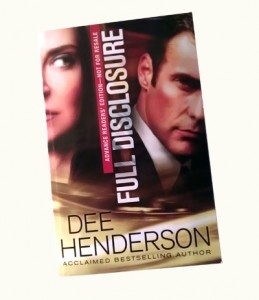 I am a longtime fan of author Dee Henderson, ever since I read The Negotiator and True Devotion in 2005. So when the opportunity came to read an advance copy of her latest novel, Full Disclosure, I jumped at it.

In this novel, FBI agent Paul Falcon gets a break on the biggest case of his career–the opportunity to catch a serial killer and solve 30 murders. Meanwhile, he chooses to pursue a relationship with Ann Silver, a proficient and successful homicide cop in her own right. But hidden secrets challenge their budding relationship.

Much of Henderson’s trademark writing skills are evident in this novel. The characters are well rounded, mostly realistic and likeable, in fact I would like to be friends with these men and women. And the plot contains intricate details carefully woven together to create twists, turns, and a few surprising revelations.

Sadly, it is far from her best work. While most of her books are correctly categorized as “romantic suspense” there was little, if anything, suspenseful about this novel. The action was relegated to the periphery or takes place prior to this story’s timeline. Even most of the police work and mystery solving is done by secondary characters outside of the narrative. And the pace is a great deal slower than most Henderson novels. More of the focus remains on Paul and Ann’s gradually growing relationship via video chat. While perhaps a realistic view of two adult Christians getting to know each other with a mind toward marriage, it fails to really engage the reader.

Personally, I was not enamored with Henderson’s choice to utilize the popularity of her other novels (particularly the O’Malley series and Uncommon Heroes series) by turning Ann into the author of those books. I would prefer to stay deeply ignorant of the fact that these people aren’t, in fact, real and instead believe that if I were to stroll down the streets of Chicago, I might just run into an O’Malley. Henderson effectively burst my fictional bubble with, well, more fiction.

Overall, Full Disclosure is an enjoyable read, but falls far short of what author Dee Henderson is capable of creating. I’m disappointed, but thoroughly looking forward to seeing what she comes up with next.

I received a complimentary copy of Full Disclosure from Bethany House Publishers, but I was not otherwise compensated for this review. All writing, thoughts, and opinions are solely mine.